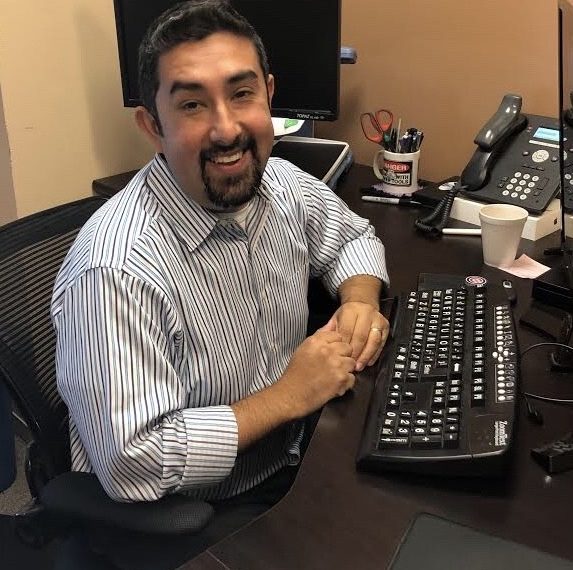 Christian Zapata, most often known as Tony, a household nickname from his middle name Antonio, heads Friedman Place’s versatile social services department. His wide-ranging duties include overseeing the whole admission process for prospective residents; providing group and one-on-one counseling; supervising case management; and acting as Friedman Place’s de facto IT department by providing adaptive technology services. Tony describes his and his team’s responsibilities in short as “a little bit of everything” that improves residents’ quality of life and their ability to live as independently as they’re able to.

The variety of Tony’s work at Friedman Place reflects the diversity of his educational and professional past. Prior to his fifteen-year-long career in social work, Tony worked as a computer programmer for General Motors after earning his associate degree in computer science, but went back to school for behavioral science, and then social work for his master’s, in part because he felt his sociable personality was a better fit for working with people. Always technologically inclined, with an early-found enjoyment in learning about and tinkering with electronics, Tony enjoys that he can still draw on his technology skills when, for example, he teaches residents how to use assistive technology such as JAWS, a program that enables users with total or partial vision loss to fully use a PC. Usually, though, Tony assists residents in getting and using Amazon Echo & Alexa devices. “They’ve been so popular, I feel like Amazon should pay me for the advertising,” he says.

Tony, “very family-centric,” spends his time away from Friedman Place with his wife, whom he has been with for fifteen years, and his two children. They share a love for the Bears and for “anything with wheels,” Tony says, an interest due to Tony being a “car guy” ever since he learned, and was able, to drive. Now visually impaired, Tony can no longer drive a car, but he still greatly appreciates them.

Tony’s visual impairment and his approach to it contribute to his abiding mindfulness when interacting and working with residents; though he too experiences vision loss, he acknowledges that he and any one resident do not share the same experience of it. Tony says this nod, at differences in each individual’s life course, experience, and opportunity keeps him from equating residents’ capabilities with his own, assessing potential from the notion of, “If I can do it, you can do it.”

Tony echoes the three other blind and visually impaired staff members of Friedman Place when he describes his work as a dovetail of both work and life experience. While he feels this convergence with the residents he connects with each day, it also becomes vivid when he receives a first-time call from someone expressing interest in living at Friedman Place. Many of these conversations are not just the caller’s first time asking about a place to live, but the first time they have spoken with someone about their experience with vision loss. These callers often approach disability as an identity-consuming trait, confiding in Tony a sadness at the idea that their ‘life is over’ because they can’t see. Tony finds great reward in these moments—when he can tell these callers that, no, their life is just beginning—in which he can provide clarity and validation to people in an overwhelming and possibly traumatic time.