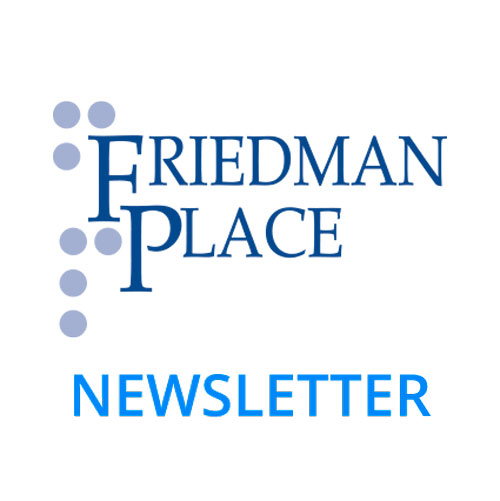 Take a look at our latest newsletter for Summer 2018!

Lighthouses on The Mag Mile

Are you looking for a fun, free way to spend an afternoon viewing art while learning about people with disabilities in Chicago?

Friedman Place is participating in “Lighthouses on The Mag Mile,” a citywide free public art exhibition celebrating the call to action for access and inclusion for people with disabilities.  This fabulous exhibition can be found along Chicago’s famous North Michigan Avenue, from June 19, through August 11. This world class event features 51 six-foot lighthouse sculptures, created by national and local Chicago artists, many with disabilities. 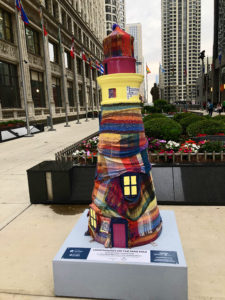 Friedman Place’s contribution: “Our Woven Lighthouse” was created in our weaving studio. It involved taking a 40+ foot piece of fabric, woven collaboratively on a community loom by weavers who are blind and disabled, and wrapping it around the structure. The various sections of the weaving are made of different types of threads and yarn – some very find and smooth, others thick and rough. It provides a ranging and varied textural experience to the person viewing and touching the completed lighthouse. The colors too vary by section, some being muted while others are quite bright. This piece has been selected in part because it shows weavers of various skill levels responding to pattern, texture and color, jointly creating an ultimate expression of their collaborative work. The final ” woven lighthouse” is a beautiful, visually arresting, experiential beacon for access and inclusion for people with disabilities. 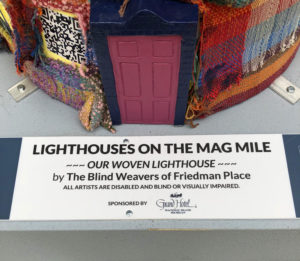 Friedman Place’s weavers represent a unique point of view. Our Therapeutic Weaving Program functions as a creative outlet for individuals who are living with a disability or multiple disabilities, blindness being the common factor. Our weavers are always eager to present their work and share with others what they can accomplish when the all-too-common barriers to inclusion are lowered. The opportunity to have their collaboratively created artwork displayed to so many thousands of people through a public display of this type is extremely empowering, compelling and validating.

The agency’s Therapeutic Weaving Program is part of the David Herman Learning Center, which honors the legacy of lifelong learner, David Herman, a 25-year Agency resident who was blind and deaf since early childhood. Friedman Place residents are empowered through the center to pursue learning opportunities and technology skills to their greatest desire and capacity. The Therapeutic Weaving Program – located at Friedman Place – provides residents an opportunity to create original, one-of-a-kind weavings and in the process enhance the individual’s senses of self-efficacy and worth as well as general learning and socialization, as most weaving is done individually but in a group setting. All aspects of the program are educational and facilitate learning to the resident’s greatest desire and capacity.

You can find “Our Woven Lighthouse” at

Summertime is a wonderful time to Volunteer at Friedman Place!

Friedman Place offers a wide variety of activities and outings for our residents all year round, but Summer is always busiest as there are so many opportunities for outdoor fun! In addition to our daily activities and special guests or performers inside our building we take residents to many destinations in the Chicago area. Volunteers are almost always needed to accompany residents and help them navigate their destination.

Our first trip of the Summer was one of our most popular – Six Flags Great America in Gurnee. A group of staff, residents and volunteers spent the day on easy rides like the Carousel to some of the scariest of roller coasters. They all returned with big smiles on their faces!

We have several other adventures planned for this Summer and more may be added to the calendar for late July and August.  You can always check with our Activities and Volunteers Department directly to find out if anything has been added. Call Beth Elman at 773-409-6123 or email beth@friedmanplace.org, for more information. 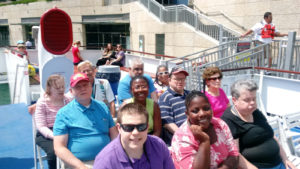 Here are some confirmed Outings for Summer 2018:

Dining in the Dark Experience

On Sunday, June 3, Friedman Place held our first Dining in the Dark Experience Event. Over 50 guests had the unique experience of being blindfolded and led into our Dining Room by sighted guides. Once situated at their tables, the blindfolds were removed to reveal total darkness. Once some tips for eating in the dark were provided by our Certified Vision Rehabilitation Therapist – Judith Querciagrossa, our guests enjoyed (or at least tried to enjoy!) a vegetarian meal complete with soup, salad and wine!

As the meal ended, two of our employees – both of whom live with blindness – shared their stories of losing their vision, how they adapted and how they are doing currently.  Allen West – our computer instructor – spoke of losing his sight as a young child and his fearlessness; while Jeff Flodin – one of our social workers – talked about all of the emotions and adaptations he experienced as he lost his vision in his 30’s and 40’s. Their experiences are very different, but they also have a lot in common, each lives independently, they both have guide dogs and they both work at Friedman Place! They happily answered questions from the audience at the end of their presentation.

Once the presentations ended, our Executive Director – Alexander Brown, answered additional questions and then lit a candle to slowly bring some light into the Dining Room. More candles appeared and dessert was served while guests mingled with each other as the event came to an end. As people left, staff heard many positive reactions from our guests, we look forward to hosting another similar event in the future.

Susie was born in 1974, at Illinois Masonic Hospital in Chicago. She was premature and weighed just two and one-half pounds. As part of her treatment, she was placed in an incubator and, unfortunately, the high levels of oxygen damaged her eyes, resulting in blindness. This was not an uncommon experience in earlier decades, it became far less common by the 1970’s and is very rare today. Known as “A Miracle Baby”, she stayed in the hospital for 80 days! Susie’s parents and family provided a loving environment and supported her in every way. At the age of three (3), she learned to feel different textures and worked hard to read Braille (which she fully mastered by adolescence!). Later she attended a special school program at Skinner and Farnsworth Elementary Schools in Chicago.

For high school, she enrolled at Carl Schurz High School where she was an excellent student and graduated in 1993. She then enrolled at the Illinois Center for Rehabilitation and Education, where she was a very persistent, tenacious student and furthered her adaptive skills so she could be as independent as possible. She attended other training programs for persons who are blind and worked for some time packaging home-care products and doing clerical work.

Susie really wanted to help others and become a volunteer tutor, so she participated in several programs for persons who are blind and taught several subjects, including: Braille, arithmetic, spelling, basic typing on the and Word Perfect 5.1.

Susie is a woman of many talents and interests. She writes poetry and is a fan of music. She most enjoys attending concerts and is a loyal fan to many favorite performers, but her favorite is Joan Jett. She wrote a beautiful poem about Joan Jett and has been to many of her concerts. As she expressed herself, “I started going to Joan Jett’s concerts in May of 1998.  I’ve been to eleven (11) of her concerts and this year was my 12th. Soon, I’ll be going to my 13th concert. I got a chance to give Joan Jett a hug and take pictures and to tell her I’ve been her fan since as was seven (7) and she is awesome!” 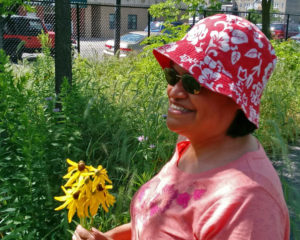 She was introduced to Friedman Place as a volunteer and became a model volunteer – she was extremely impressed by the high quality, committed staff and community members.   Shortly after she began volunteering at Friedman Place, her volunteer position came to end, leaving her isolated at home.  She valued her independence and did not want to burden family members for rides or entertainment.  Additionally, she wanted to be sure she had a place to live as her parents aged, so she initiated the process to join the community at Friedman Place. She recalled her excitement when she finally became a resident, as she reflects: “I was so happy on that fateful day of June 27, 2011. I became an official resident at Friedman Place. I want to stay here for life!”